The Oxford Art Society was formed in 1891 at the instigation of Walter Tyrwhitt who remarked on the need for a society to encourage Art in the City and in the University. The President was to be Hubert von Herkomer, RA, who had succeeded John Ruskin as the Slade Professor of Fine Art in Oxford, and who demonstrated painting in his lectures because he believed that knowledge of the practice of painting was important for understanding history of art.

The Society held an annual exhibition each year except for six years during World War II. During the course of its history the Society has invited eminent artists to exhibit in its exhibitions and to become honorary members, many associated with the Ruskin School of Drawing and with the Slade School which had moved from London to Oxford during the World War II years. Albert Rutherstone and Percy Horton were both Head of the School and President of the Society. A close contact with the Ruskin School was maintained and with the Ashmolean Museum which hosted the Society’s exhibitions for 56 years until a new gallery space became available at the Westgate Library in 1973.

The centenary of the Society was celebrated in 1992, one hundred years after its first exhibition. This large exhibition of nearly 400 exhibits was held at the Museum of Modern Art in Pembroke Street. Works by earlier artists who had been associated with the Society were shown, including two large portraits by the first President, Sir Hubert von Herkomer, while 313 works by present members filled the upper floor. 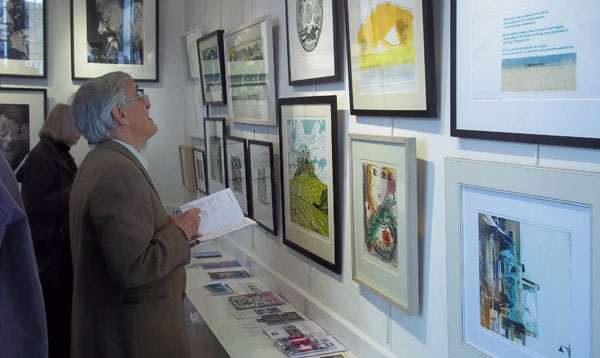 The majority of the Society’s members have professional art training and many combine their lives as working artists with teaching or other art related professions. A good number of members exhibit nationally or internationally, as well as locally during Oxfordshire Artweeks.

A century of Art in Oxford

Graeme Salmon, Society Archivist,  has put together an excellent booklet on the 1992 OAS centenary exhibition of key members of the Society during that period at the Museum of Modern Art, (now Modern Art Oxford).

Attached is a web version of the booklet: MOMA-book-reset-for web