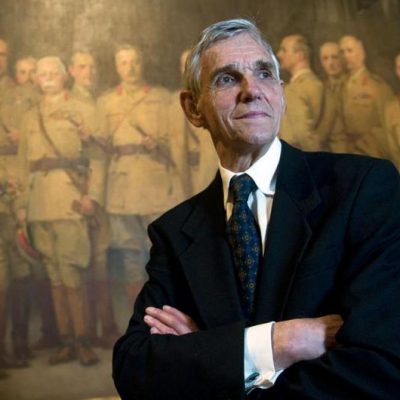 8 February 2021 at 5.00pm. A zoom lecture to the Oxford Art Society Associates
For more information visit the OASA page

Richard Ormond at the time of gifting a collection of letters, sketches and memorabilia to the Museum of Fine Arts in Boston, towards the establishment of the John Singer Sargent Archive (Boston Globe, June 2015 – Hannah McKay for The Boston Globe)

This lecture is the first of our Zoom lecture programme for 2021.

Our speaker, Richard Ormond, was Deputy Director of the National Portrait Gallery, London between 1975-83 and was Director of the National Maritime Museum, Greenwich, from 1986 to 2000. During this period, he was responsible for a sequence of spectacular exhibitions, including Armada, Mutiny on the Bounty, Henry VIII, Pirates, Titanic and the Story of Time. He served as the Samuel H. Kress professor at the National Gallery of Art, Washington D.C., 2001-02. He has written extensively on 19th century British art, and authored books and catalogues on Frederic, Lord Leighton, Sir Edwin Landseer, F.X. Winterhalter and G.F. Watts.

In relation to his February lecture to the OASA, our lecturer is co-author of the nine-volume Sargent catalogue raisonné, published by Yale University Press, 1998-2016, and is a great nephew of the artist. He is co-curating an exhibition on ‘Sargent in Spain’ for the National Gallery of Art, Washington D.C. and for the San Francisco Art Museums, 2022-23.

Sargent’s love of things Spanish ran deep, embracing the exotic qualities of Spanish life and character, its art both past and present, its flamboyant music and dance, its magnificent architecture, its literature, landscape and its people. The lecture will draw out the influences that helped to nurture and develop Sargent’s art. Over the course of six lengthy journeys to Spain (1879, 1892, 1895, 1903, 1908 and 1912), the artist executed over two hundred oil paintings and water-colours of Spanish subjects.