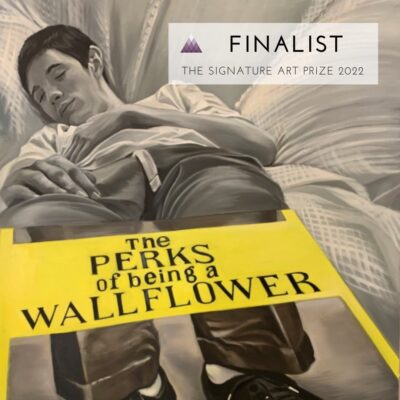 Ruth Swain, OAS member, has been recognised as a finalist for the Painting Category in the Signature Art Prize with her painting “The Perks of being a Teenager” (Below), details of which are available to view here.

She also remains a candidate for the People’s Choice Award, the finalists of which are due to be announced on the 26th of May. Those wishing to submit a vote, can do so via a ‘like’ on the Signature Art Prize Instagram and Facebook Accounts, here and here.

The Prize Winners will be announced at the Signature Art Prize Gala in June 2022.

Further, she has been selected as a finalist for The Holly Bush Emerging Women Painter prize with “That sinking feeling” (Oil on Board, below). Details here.

This selection comes one year after placing as a runner up with “Head in a book”.
The winner is to be announced at the Private View at Lauderdale House in Highgate on June 8th. The gallery will be open after that date for the exhibition until 4th July.