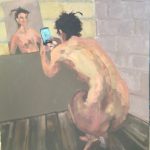 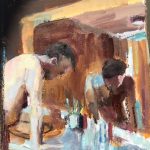 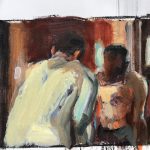 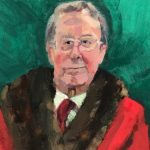 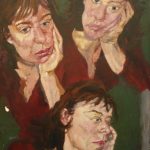 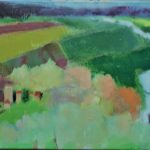 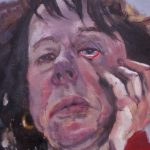 Self Portrait with torn retina, 2016 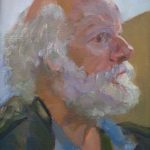 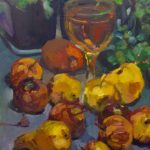 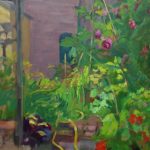 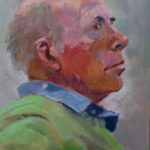 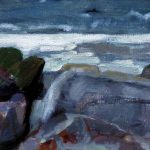 I was born in London in 1956 but brought up in the Midlands. I returned to London in 1983 to work as a journalist. I wrote for national newspapers and was a staff feature writer on the Daily Mail until 2005 when I went freelance. I now write for the Daily Telegraph, the Spectator and the Salisbury Review.

I have been painting and drawing all my life, more seriously since 2005. In 2003 I joined the Stuckist Painters who believe in representational art and traditional skills. They also want painting to be expressionistic and imaginative rather than academic and formal.

July 2016 Exhibited in the Discerning Eye Exhibition at the Mall Gallery, London.

July 2014 Exhibited in the Discerning Eye Exhibition at the Mall Gallery, London.

JUNE 2012 Self Portrait with cat exhibited in the RA Summer Show.

JULY 2009 “Not the Groucho Club” Stuckist show, at the Islington Arts Factory.

NOVEMBER 2008 Work included in Stuckist group show in Liverpool, at the Walker Art Gallery, as part of the Liverpool City of culture. Sold one painting. www.stuckism.co.uk

FEBRUARY 2007 Group Shows at the Nunnery Gallery in Bow and at
43 South Molton Street.

SEPTEMBER 2004 Exhibited at a Stuckist group show at the Walker Art Gallery in Liverpool. Sold a painting for £3,000 to an EU Commissioner. This painting, of Myra Hindley was featured on the front page of the Guardian newspaper. “Daily Mail sacks writer who painted Hindley picture“

JUNE 2000 Exhibited and sold a portrait of Ken Livingstone in the RA Summer Show.

During a break from journalism I had a brief spell in teaching art.

Work included teaching painting in acrylic and water-colour drawing in pencil and charcoal, and sculpture using soap, wood and matches. held a weekly life class and taught some art history through slides, videos and DVDs. While I was there several prisoners won awards in the Koestler Exhibition a national competition for prisoners. One was invited to exhibit at the ICA.

I moved from London to Oxford in 2014 and have become very interested in landscape, especially the area around Dorchester and the Wittenam Clumps.