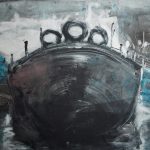 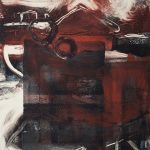 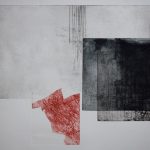 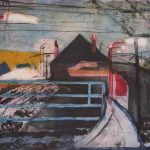 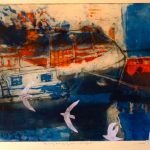 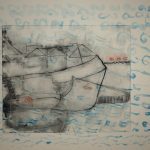 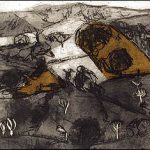 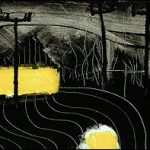 As well as E.Oxford I live in Brentford, overlooking the Grand Union Canal where it enters the Thames, so I look down on the ‘Big Tender on the Canal’ ; just now it’s only a monoprint, I am hoping it will become an etching. When I cut the big zinc plate in the workshop I thought I was going to be working on the big full front one, ‘Big Lighter on the Canal’, so I thought I had better do some monoprints on the little off cuts before I started seriously, and the little offcuts seem to have won out. They are both just monoprints at the moment. ‘Incoming Tide’ and ‘Tide rising, birds flying, canal at Brentord’ are finished works. ‘ Lines and Forest and Fire?’ is part of my ‘Lines’ etchings, just playing with lines, (all started with seeing a famous Australian printmaker , Fred Williams, in the British Museum). So I look out for vertical lines. Willesden Junction is quite a while ago now.

1-24 March OAS Members at The Sewell Centre Gallery, Radley College
1-27 April ‘Inspired by the Canal’ at The Jam Factory, Oxford