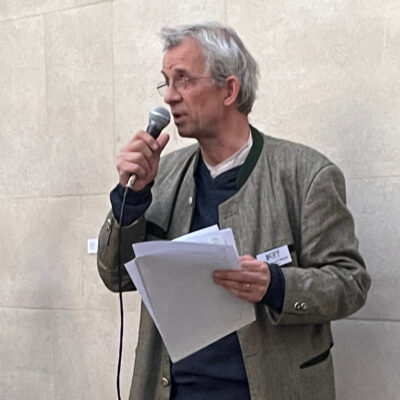 The Power of Art to express Love

In times of great suffering as today in the Ukraine, caused by brutal military action,

we artists might ask ourselves sometimes about the usefulness of our work.

I realised that the power of art lies in the maker’s ability to express love.

More than three thousand years ago a sculptor decided to sculpt

More than two thousand years ago, an Etruscan tomb stone was carved depicting a husband and a wife lovingly embracing each other. Etruscan Sarcophagus, husband Larth Tetnies and his wife Tanchvil Tarnai.

In Chichester Cathedral you can an imposing sarcophagus of a knight in armour lying beside his wife. Look closer and you can see that he has taken his right hand out of his armoured glove and his wife rests her hand gently in his. She turns her body slightly towards him.

But the artist does not always have express a symbol of love – just as powerful, is an expression of grief.

You find great sadness in the sculpture of the “Mourning Parents” by the artist Käthe Kollwitz. The artist and and her husband Karl had lost their eighteen year old son Peter at the beginning of the First World War. Hewn in stone two isolated figures are kneeling down, the man in a position of pride and grief, the woman bowing her head in boundless mourning.

Today, again, a tyrant raises his head and hands out unbearable pain. I wish I could lead him to Käthe Kollwitz’s memorial to show him the deeply thet desperation of all who suffer under his brutal and senseless cruelty is felt.

In Ukraine artists are now welding tank obstacles together and others are sewing bulletproof vests. We artists, who are further away have to keep making work – again and again over millennia – to honour the creation, our freedom and love.